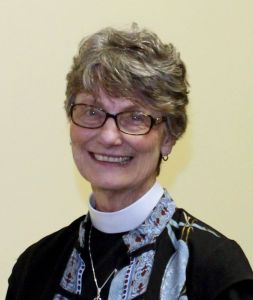 John the Baptist was ranting in the desert. Ranting at these people who had left town and come out to hear what he had to say and to be baptized.  John was extraordinary.  He would say anything to anybody who misunderstood religion or had suspect ethics, and that’s what he was doing in our gospel lesson today.

Actually, the Dean of General Seminary who preached at Dean Keller’s Installation, was something like John.  He did some finger pointing and loud talking to make his point, but most importantly, he called on us to forget any ideas we might have that Trinity is Chris’s work alone.  No, he said, “You, and you, and you (pointing his finger around the room) must do your part.”

The people whom John the Baptist so blatantly called a “Brood of Vipers” were descendants of Abraham, the father of our faith, they were the first people to believe in One God.  They understood themselves as the chosen ones to whom God had revealed this knowledge.  They thought God’s good favor was something they possessed because they had inherited it from their ancestors.  This gift was for themselves, a way of staying on the inside, assuring their status and also chosen ness.  They wondered or they wouldn’t have been there listening to John.

In the same way, I hope we wonder.  I hope we question even our closest held beliefs. Someone might shed some new light for us.

Someone might give us a new perspective.  Maybe we Christians think we’re on the inside track with God and there’s nothing new to be discovered or taught.  John’s ranting was about another way of seeing the life of faith--not as a personal possession but as a source of connected ness.

In our Book of Common Prayer, in the back, you can find an old-fashioned instrument called the Catechism which we used to memorize.  I don’t think Confirmands memorize it any more, but all of us can look to it for clear statements of faith.  Here’s the Episcopal question and answer for John’s preaching:  “What is the mission of the Church?”  “The mission of the Church is to restore all people to unity with God and each other in Christ.”

I think that’s what Chris was talking about last Sunday morning when he fleshed out his second goal as Dean of Trinity Cathedral.

He said in addition to growing the church, with our help, my distillation of what he said, was that he hopes our life together will be healthy and interesting.  He hopes we will recognize when something is “useless or useful,” “friendly or unfriendly” and we will use our emotions accordingly and appropriately.  And he hopes we will engage our powers of both intellect and will to drive our moral choices, seeing “that all good comes ultimately from God.”

Unity beyond one’s own group was a new way of seeing the world in John the Baptist’s time, and John had it so right that we still look to his teaching.  Here’s the amazing thing—John wasn’t polite.  He didn’t say, “Welcome to my preachin’ mission down here by the Jordan River.  I’m sure glad ya’ll could make out here today.  No, John ranted! He called the crowd a brood of vipers and ridiculed them for saying  “We have Abraham as our ancestor.”

But did they turn and leave?  No.  The people asked, “What then should we do?”

What would you do if someone called you a Viper—a snake?  I doubt I’d stick around, but this so-called Brood of Vipers stayed right where they were or maybe they even drew closer and they asked, “What then should we do?”  They had an intuition or a sense, that this man, John, knew what he was talking about.  So they stayed to see what they should do to stop the ranting.

To the soldiers he said, “Do not extort money from anyone...and be satisfied with your wages.”  To everyone he said, “Whoever has two coats must share with anyone who has none; whoever has food must do the same.

John gave concrete and particular instructions to each group and each in it’s own way had to do with living so thatrelationships are restored or established among people who arealienated from one another.  Share what you have.  Be fair in your dealings. Don’t use the power you have to take advantage of people.  And an instruction that apparently was just as hard then, as it is today.  “Be satisfied.”

These are the good fruits.  These are the “fruits worthy of repent-ance”—repentance meaning turning from one way of life to another.  We all have patterns of life in our work, or leisure, or friendships and family that bear asking the question, “What should we do?”

John’s main point seems to be that salvation is the main point, or another way to say it—Jesus’ good news is meant to be lived.  It is not simply an affirmation.  The Good news of Jesus Christ is a force that changes our relationships with everyone and everything. There’s no point saying the words that the mission of the Church is to bring all people into unity with God and each other if we don’t live in a way that promotes unity.

In Alcoholics Anonymous there’s a saying about someone who knows the right words but doesn’t live them:  “He talks the talk, but he doesn’t walk the walk.”  We can memorize all the words of Jesus, but if they have no bearing on our lives we’re just talking the talk.

So the people vowed to exchange their old ways for new lives of generosity, compassion and justice, and they were filled with expectation.  They knew John was talking like a Messiah would talk.  He was saying things that suggested that God was coming into their lives in a powerful new way.

John’s ranting did not fill the people with shame and anger. They were filled with expectation, with hope, because they believed that justice and generosity spreading through their lives and their world would be a sign that God was near.