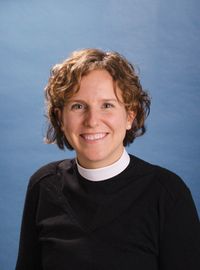 May the words of my mouth and the meditations of our hearts be acceptable in your sight, Oh Lord, our Strength and our Redeemer. Amen.

My dad fancies himself a funny man. When I was young, he would embarrass me by snickering and pointing and elbowing me every time we walked passed the women’s lingerie section at Wal-mart. When I say young, he still does this. He used to tell me that I had two twin older brothers. I’m the oldest child. He said that I used to have two twin older brothers who had behaved badly, and the story changed each time. They behaved badly by not buckling their seatbelts, or not eating their dinner, or fighting in the back seats with their siblings, and that was why he had to kill them.

His antics extend to Facebook now where he regularly invites me to like fan pages for the Monsanto Company and Ayn Rand. This week he put a meme on my wall with a woman holding a bible. Some of you may have seen this, it was circulating. It said, “You’re so vain, you probably think the psalm is about you.” Over the years I’ve learned to play the straight man to his antics.  I’ve gone from flustered and red-faced and to another approach.  So I replied to the picture and I said “You know, that’s a really interesting question of biblical hermeneutics, Dad” and I meandered on thoughtfully about who scripture is for and about what an expansive interpretation of scripture might look like if it is not for you. He never replied so I think I won this one. And well it is an interesting question of biblical interpretation. Who are these stories for? What are they about?

Take the Gospel for today. I read it a chapel this week for our Early Childhood Education Program, and a bunch of 3 and 4 year olds can definitely count up to nine and exclaim that they are indeed missing a coin. A group of 20 of them can more that multiply in volume to make up for the sounds of 99 bleating and vying sheep. But when it comes to the moral of this story? “So boys and girls, God is a shepherd who finds his lost sheep. God is a woman who sweeps her house and finds what she’s misplaced.” I felt a little lame. When you tell these stories to kids, you’re struck by the fact there isn’t a very clear moral in most of them. These aren’tAesop’s Fables: no warnings against the witches in the wood; nothing really about the virtues of unselfishness or truthfulness; no real promises that anything is going to go particularly well for you, even by being totally perfect. If serving a crucified God holds its proper weight in our minds. That’s why I am dubious when people tend to equate Jesus with a Zen master or a teacher of timeless truths or a dispenser of any sort of good advice. “Which one of you,” Jesus asks, “wouldn’t abandon 99 sheep to find that one missing sheep?” At which, everyone with your inquiring and discerning hearts, should look around and think, “No, no I don’t think abandoning 99 sheep to fend for themselves is a very effective sheep-maximizing strategy here. Have you met sheep?” “Which one of you,” Jesus asks,  “wouldn’t sweep the house for the coin and throw a party when you find it?” That’s not a party I’ve ever been invited to. The coin was a day’s wages. I mean, how much does a party for all of your friends and neighbors cost? The Gospel today is unfortunately, in my opinion, truncated in its crescendo that’s two of the three stories that Jesus is telling in a row here, and the peak of which is “The Prodigal Son.” You’ve heard the story, and it’s the older brother, always the straight man to his father’s antics, who boils over at his father’s prodigal nature.

Who are these stories for? Who are they about? Jesus tells the scribes and Pharisees, our current straight men, this series of stories about the lost being found. Now, just sort of base level here, when Jesus tells parables, the main actors are God and/or Jesus, the “and/or” being the particularly provocative part about this guy hinting maybe he is more that he is willing to say, something too holy for the Gospel writer to name. But he is provoking a question to all of us with these inquiring and discerning hearts: Who exactly in this story is lost? Is it the Gentiles as a whole? Is it just the tax collectors and sinners sitting around them, the dregs of society? Is it Israel? Is it these scribes and Pharisees entrenched so in the answers that religion has given them that they are so lost, that they cannot see the kingdom of God sitting around them? And what does it mean to be found? Can a coin or a sheep have anything to do with its own finding, or does it rely on being totally sought, swept from the dusty corner, carried back into the fold, being not more responsible for its foundness than its lostness?

I’m reading a book about the Nones, which is the term which we use for the 25% now of Americans who say that they have no religious affiliation. Not necessarily atheist, often they describe themselves as spiritual, not religious, right? The author is a None and her status happened unconsciously for her and her family, she said. These lofty intentions, she had been raised in all sorts of different types and experiences with church, but lofty intentions to expose her children to the great traditions of human existence when she got married. She thought, “This is what we will do.” She and her husband talked about it. But life happened, as it does, and she woke up one day with her 9-year-old confused by the sight of a Good Friday church procession. She said all of her nonreligious parent friends were worried about it too when they were talking about it at a party. They’d all grown up with some sort of church interactions, but it was a given and that given just left over time. There were various and understandable reasons that people had to have problems with the church: the hypocrisy of the people, the exclusionary nature of the beliefs. But she kept saying it was mostly not even a thought, an unconscious decision, until they all had kids who had full expectation of an Easter bunny that loved them and brought them candy but not much else. The author’s lovely and she had very good hopes for her children, though, and there was this line in there of when she realized what had happened. She wanted her child to know what it was like to bow down to something larger than himself. I’ll call it humility, though she didn’t. It was a very good hope that her child would find his proper place rather than this aggrandized self-indulgence of a consumer culture to which he would bow in order to satiate the growing appetite of his whims. The problem is that to bow to something larger, there must first be the admission of something larger. Spoken about by the ones who have come before, the handing down of practice and parables that ask more questions than they do dispense answers.

G. K. Chesterton said, “The riddles of God are more satisfying that the solutions of man.“ The worthiness of the pursuit of the mystery, the discomfort of kneeling, the burn of the wine that this is the blood of God you are taking it in, and when you do it you are being taken in as well.  Drawn past the consuming mystery of your own soul and into the deep and dazzling darkness. It is something like being lost. It is there where you know what it is like to be carried. It is there where you are fed with spiritual food and drink meant to awake your parched sense of wonder. The glimmer of your compassion to open your eyes to the world around you.

These stories are about you, too.