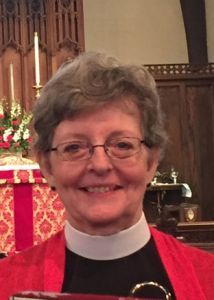 Today’s story is in all the synoptic Gospels, but we are reading it today through Saint Luke’s eyes—compassionate, healing, inclusive eyes.  For Luke, it is the LOVE of God that heals us. For Luke, humility and hope are central characteristics of Christian living.

Jesus steps into Gentile territory and is met by a man of the city who lived in the tombs, among the dead and had demons.  Demons. The man’s name, Legion, suggests thousands of demons as if the demons here represent the epitome of all that can be wrong, all that can come between God and God’s good creation.

Focus on the result of this man’s coming face to face with the LOVE of God and God’s MERCY.  With one command from Jesus, the demons come out of the man—they exit out of this story. The demons leave and the man now sits at the feet of Jesus, clothed, and in his right mind.  Saint Paul would say, clothed with Christ and he would call him a child of God. Henri Nouwen would call him a wounded healer. Note: the man, himself, is NOT a demon. The demons left.  This man, now representing the very core of our common humanity, is NOT a demon. The demons left.

Demons like violence, hatred, extreme anger, revenge, fear, anxiety—they left.  Demons like abuse of power, greed, lust, addiction—they left. Demons like projections onto others, blaming others, intolerance, extremism, excessive pride, self-deprecation—they left.  Demons like apathy, they left. Apathy—I remember where I was kneeling the day that I said our corporate confession, and for the first time, heard, really heard the part about confessing the “things left undone.”  Many, many times I knowingly confessed: “things done.” And then, suddenly taken aback as “things left undone” came into focus.

Brilliant theologians for a very long time have struggled to answer the question about the origin of evil.  We are still asking the same question. It seems to me, though, that our Scripture points more toward the practical problems of evil and God’s response to it.  So, my questions focus on God’s response. The Good News, after all, is all about God’s response to evil. I trust God’s response.

But this child of God in Luke’s story is a holy scene that points to God’s response to evil.  And the response, we see through Jesus, involves compassion and mercy. Somehow, Jesus sees past the demons, sees the core of this man’s humanity, sees our common human condition and isn’t ashamed to be in relationship with him.

The Gentile townspeople are a witness to this example of MERCY and AMAZING GRACE.  We might think the witnesses would be filled with wonder and a yearning to know more about this transformation and more about this Jesus in their midst.  Instead, they chose separation. Instead, they allowed fear or other distractions to dictate their response—they asked Jesus to leave.

The man, however, wants to stay with Jesus.  But Jesus sends him back to his own home to share his experience with his own community.  And so, the story goes, he does just that. But that’s all we learn from Luke’s story. This man who was once possessed by thousands of demons may very well be the first missionary to the Gentiles, and all Luke tells us is that he did what Jesus asked him to do—“Go home,” Jesus says, “and tell them how much God has done for you.”  That can’t be an easy thing to do—to return to folks who know his tragic history, to take responsibility for his actions, to share with skeptical folks what experiencing Good News does for you.

I know from my own experience how hard it can be to pay attention to stories about the injustices of evil.  A recent example is Bryan Stevenson’s book, Just Mercy: A Story of Justice and Redemption.  It is a true story about the potential for mercy to redeem us.  It is an argument for compassion in the pursuit of true justice. A friend gave it to me and said everybody should read it.  She is right. Regardless of our view about capital punishment or the criminal justice system--everybody should read it. But I will tell you it is an exhausting, gut-wrenching read.  I moved through anger to sadness, at times leaned toward despair.

In one poignant chapter, Stevenson is experiencing despair as he reflects on his life’s work, being surrounded by so much brokenness in the world.  In Stevenson’s own words, his clients were broken by mental illness, poverty, and racism. They were torn apart by disease, drugs and alcohol, pride, fear, and anger.  In their broken state, they were judged and condemned by people whose commitment to fairness had been broken by cynicism, hopelessness, and prejudice. He starts to question why he does what he does.  It took him a while to sort it out, but then a moment of clarity: “I do what I do,” he says, “because I’m broken, too.” Bryan Stevenson is an example of a Wounded Healer.

Stevenson reminds us that we are more than the worse thing we’ve ever done.  We are more than broken. He reminds us that “there is a strength, a power even, in understanding brokenness, because embracing our brokenness creates a need and desire for mercy, and perhaps a corresponding need to show mercy.”  He reminds us that, “When [we] experience mercy, [we] learn things that are hard to learn otherwise. [We] see things [we] can’t otherwise see; [we] hear things [we] can’t otherwise hear. [We] begin to recognize the humanity that resides in each of us.” 1

Another Wounded Healer is Janet Connors.  After the brutal slaying of her teenage son, Janet reached out to her son’s killers to offer forgiveness.  She established a connection with one of them, A.J., in the hopes that their bond would help him turn his life around.  It did turn his life around. And now Janet and other mothers of murdered children have formed peacemaking circles to help young people break the chain of violence and revenge. 2

Other Wounded Healers:  Last week folks across America, including some of you, watched the documentary film EMANUEL.  It is the true story of the victims and survivors of the Charleston, S. C. church shooting. It is a powerful, powerful film that everybody needs to see and reflect upon.  I’m still unpacking my own response to it, but I can tell you this: it is a witness from real people, real wounded healers, who responded with love and grace to the demons of fear and hatred and revenge.   It is a real-life example of the Holy Spirit working through wounded folks so they could become a source of LIFE for others.

Lest we think being a wounded healer always requires right words and profound actions, listen to what Henri Nouwen has to say about that: “One compassionate gaze or one affectionate handshake can substitute for years of friendship when a person is in agony.  Not only does love last forever,” he says, “it needs only a second to be born.” 3  Love needs only a second to be born.

We are all broken by something.  We are all children of God. We have all experienced the gentleness of Jesus and the nudge of the Holy Spirit.  We can all respond to evil by being Wounded Healers for one another.