It was conceived and planned by the Rt. Rev. Henry Niles Pierce, who alone raised the money to build the Cathedral. Designed in a cruciform shape (the shape of a cross) in English Gothic style, the Cathedral features symbols of its namesake, the Trinity, such as trefoils, fleurs-de-lis, and clover leaves.

The Cathedral was built in three stages, as finances permitted. The first service was held on October 19, 1884, when only the nave and baptistry were finished and the altar was placed under the west window on an improvised chancel. At the convocation meeting in the spring of 1885, Trinity reported 67 members. The transepts and crossing were completed by February 1889 when the altar was placed under the north transept window. The chancel was finished by Easter of 1892, thus completing the structure, and moving the altar to the east end of the Cathedral.

Memorials and gifts have been presented through the years, the first being the brass altar cross in memory of the first acolyte, Halfden Degen, who died in 1886 of typhoid fever. The window over the altar is a memorial to Bishop Pierce and was dedicated on Easter 1909. The carved eagle lectern was donated in 1918 in memory of Edmond Urquhart.

The present altar and reredos, carved in Oberammergau, were given in 1924 memory of Frances Blakeslee and Philander Keep Roots, at which time the choir room was converted to the chapel – another memorial to Bishop Pierce. The clerestory windows were installed in 1937, the south transept window in 1939, the north transept window in 1959, and the nave windows in the 1960s and the 1970s.

Under the direction of Dean and Rector the Very Rev. Henry Lee Hudson, 1998 witnessed nearly $5 million in renovations of the Cathedral proper, the Parish House and the offices of the Diocese of Arkansas. Dean’s Hall was erected, providing a connecting building between Morrison Hall and the Cathedral proper. The new building, with a handicapped entrance opening onto 17th Street, houses the clergy sacristy, dressing areas for acolytes, lay readers and chalice bearers, an elevator, and storage space. The Cathedral was closed on Easter Day 1998 and was reopened on Christmas Eve of that same year. During the “year in exile” as it was called, all services were held in the Cathedral’s gymnasium, Chancellors Hall. In 1999 as part of the renovation project, a new 4-manual, 82-rank pipe organ was installed by the Muller Pipe Organ Co. of Toledo, Ohio. Designed by then- Organist & Choirmaster James R. Metzler, the organ is the largest instrument of its kind in the state of Arkansas.

Trinity Episcopal Cathedral, with over 1200 registered members, is both a parish church and the Cathedral church of the Diocese of Arkansas. 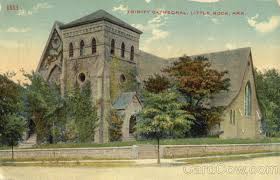