The Episcopal Church, having its roots in the Church of England, is also an Anglican Church.

Like all Anglican churches, the Episcopal Church is distinguished by the following characteristics:

Anglicanism stands squarely in the Reformed tradition, yet considers itself just as directly descended from the Early Church as the Roman Catholic or Eastern Orthodox churches. Episcopalians celebrate the “Mass” in ways similar to the Roman Catholic tradition, but do not recognize a single authority, such as the Pope of Rome.

Episcopalians believe that Christians should be able to worship God and read the Bible in their first language, which for most Episcopalians, is English, rather than Latin or Greek, the two earlier, “official” languages of Christianity. Yet the Book of Common Prayer has been translated into many languages, so that those Episcopalians who do not speak English can still worship God in their native tongue.

The Book of Common Prayer

Unique to Anglicanism is the Book of Common Prayer, the collection of worship services that all worshipers in an Anglican church follow. It’s called “common prayer” because we all pray it together around the world. The first Book of Common Prayer was compiled in English by Thomas Cranmer in the 16th Century, and since then has undergone many revisions for different times and places. But its original purpose has remained the same: To provide in one place the core of the instructions and rites for Anglican Christians to worship together.

The present prayer book in the Episcopal Church was published in 1979. Many other worship resources and prayers exist to enrich our worship, but the Book of Common Prayer is the authority that governs our worship. The prayer book explains Christianity, describes the main beliefs of the Church, outlines the requirements for the sacraments, and generally serves as the main guideline of the Episcopal life.

The Anglican approach to reading and interpreting the Bible was first articulated in the 16th Century by Richard Hooker and is known as the “three-legged stool.”

While Christians universally acknowledge the Bible (or the Holy Scriptures) as the Word of God and completely sufficient to our reconciliation to God, what the Bible says must always speak to us in our own time and place. Scripture is the first leg of the stool

The Church, as a worshiping body of faithful people, has for two thousand years amassed experience of God and of loving Jesus, and what they have said to us through the centuries about the Bible is critical to our understanding it in our own context. The traditions of the Church in interpreting Scripture connect all generations of believers together and give us a starting point for our own understanding. Tradition is the second leg of the stool.

Episcopalians believe that every Christian must build an understanding and relationship with God’s Word in the Bible, and to do that, God has given us intelligence and our own experience, which we refer to as “Reason.” Based on the text of the Bible itself, and what Christians have taught us about it through the ages, we then must sort out our own understanding of it as it relates to our own lives. Reason is the third leg of the stool.

How do Episcopalians worship?

Sunday is traditionally when Episcopalians gather for worship. The principal weekly worship service is the Holy Eucharist, also known as: the Lord’s Supper, Holy Communion, or Mass. In most Episcopal churches, worship is accompanied by the singing of hymns, and in some churches, much of the service is sung.

Episcopalians worship in many different styles, ranging from very formal, ancient, and multi-sensory rites with lots of singing, music, fancy clothes (called vestments), and incense, to informal services with contemporary music. Yet all worship in the Episcopal Church is based in the Book of Common Prayer, which gives worship a familiar feel, no matter where you go.

Worship in the Episcopal Church is said to be “liturgical,” meaning that the congregation follows service forms and prays from texts that don’t change greatly from week to week during a season of the year. This sameness from week to week gives worship a rhythm that becomes comforting and familiar to the worshipers.

For the first-time visitor, liturgy may be exhilarating… or confusing. Services may involve standing, sitting, kneeling, sung or spoken responses, and other participatory elements that may provide a challenge for the first-time visitor. However, liturgical worship can be compared with a dance: once you learn the steps, you come to appreciate the rhythm, and it becomes satisfying to dance, again and again, as the music changes.

In spite of the diversity of worship styles in the Episcopal Church, Holy Eucharist (which means "thanksgiving") always has the same components and the same shape. The first part of the service is designated the Word of God. It usually includes the entrance rite, the lessons and gradual psalm, the gospel, the sermon, the Nicene Creed, the prayers of the people, the confession of sin and absolution, and the peace. The second portion of the service is designated the Holy Communion. It includes the offertory, the consecration of the bread and wine in the Great Thanksgiving, the communion of the people, and the concluding prayers of thanksgiving and dismissal. A blessing may be given prior to the dismissal. 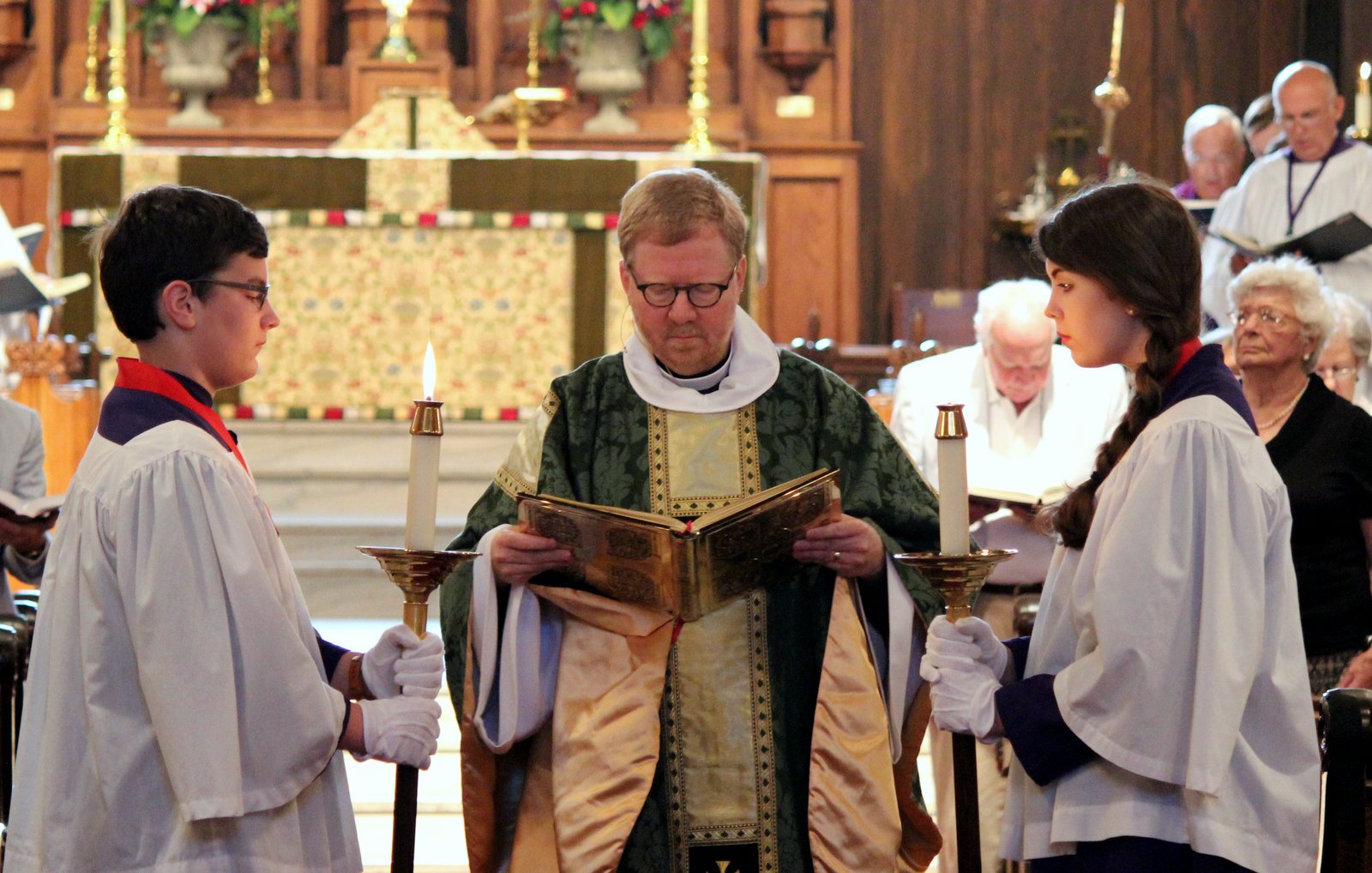 The Liturgy of the Word

We begin by praising God through song and prayer, and then as many as four passages from the Bible are read. Usually one selection from the Old Testament, a Psalm, a passage from the Epistles, and (always) a reading from the Gospels. The psalm is usually sung or recited by the congregation.

Next, a sermon is offered that typically interprets or elaborates on one of the Biblical passages heard earlier.

The congregation then recites the Nicene Creed, written in the Fourth Century, which is the Church’s statement of what we believe.

Next, the congregation prays together—for the Church, the World, and those in need. We pray for the sick, thank God for all the good things in our lives, and finally, we pray for the dead. The presider (e.g. priest, bishop, lay minister) concludes with a prayer that gathers the petitions into a communal offering of intercession.

The Episcopal Church Welcomes You 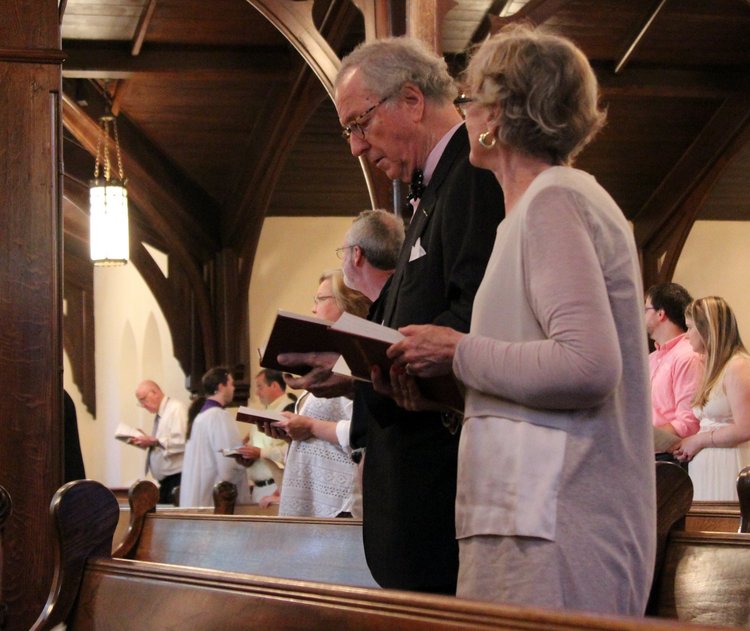 Trinity Episcopal Cathedral belongs to the Episcopal Diocese of Arkansas. Their site includes more information about our theology and worship.

The Episcopal Church also provides in depth information about our beliefs and traditions. We invite you to explore more about our Church.